> Who we are> Historic 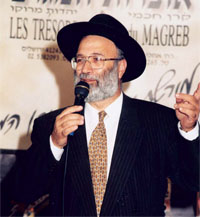 Michel Meir Abitbol was born in Morocco and learned in the Ozar Hatorah Institute of Tangiers. Then, he learned in England and France. He settled in Montreal Canada and, after 13 years there, he moved to Israel in 1981.

In Tangiers, he discovered Judaism. From there, he traveled to England and learned in the Gateshead Talmudic College. In 1967, he arrived to Paris with a dozen Yeshiva boys and Rabbi Yaacov Toledano, and together they started the famous Merkaz Hatorah Yeshiva in the suburbs of Paris.

In 1981, he settled in Jerusalem, Israel. For the first two years, he was the general manager of a leading Sephardic Yeshiva in Bne Brak. During this journey through four continents and many high level Jewish centers of learning, it became his impression and that of all of his colleagues, that Sephardic Jewry had not produced any great menof learning for a long period. It seemed that since the 15th century, few serious Sephardic works of learning could be found. Since the Spanish expulsion, it appeared as it the Sephardic Communities stopped learning, thinking and writing. Before the 15th century Sephardic literature covered 95% of all the works of that period and after the Sephardic Spanish expulsion, less than 5% of the Jewish literature is Sephardic. Bookshelves are the reality and one must to accept that reality.

In 1983, a visit to the Israel National Library of Jerusalem changed all Meir Abibol’s plans for the future. There, he discovered tens of thousands of Sephardic printed and manuscripts works, the production of 500 years of learning, thinking and writing. All this fabulous heritage ignored by the Jewish people!

Books being printed by editors and the job of printing being a business, all this heritage had no chance to be ever known. Absents are always wrong and our forefathers productions is absent from the learning institutions.

With the help of a few friends from Canada, he founded the Bne Issakhar Institute. Two years later, he opened the door of the Sephardic Library in Jerusalem, and in 1990, the Ohr Hamaarav Publishing Co., the editing and marketing section. Since then, these institutions have produced over 300 works and distributed over 3500 different titles over the world.

In 1983, we had two objectives and both were reached and of sepharadic world even surpassed:

1. Today everyone knows that the Sephardic world has produced greatly learned men and a incredible patrimony as well as a massive wellspring of scholarly writings.

2. For 15 years, we have given the opportunity to the public, to encounter that wonderful heritage, that’s why hundreds or thousands of researches are led to the field. The increasing demand for unpublished books, manuscripts, information about disappeared communities, Rabbis, family trees etc… compels us to widen our horizon and edify, in Jerusalem : the World Sephardic Heritage Center.